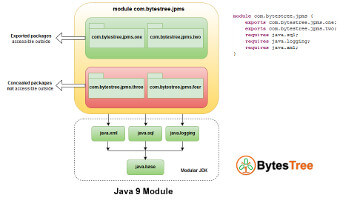 Java Platform Module System (JPMS) is one of the major feature in Java 9. This will change the way we write and publish our code/ libraries going forward. This tutorial is about modules in Java 9. It explains what is Java 9 module, why we need it and how to create and use a module.

Why We Need Modules

Any new feature is made to improve or solve problems with the existing system, module system is not an exception. It is introduced to address following problems in existing JDK:

It will be better if we can group set of classes in packages. Define which are open to the external world and which should remain protected.

Generally when we say “module”, it is an independent unit of application which represents or responsible for single feature/functionality. This is mostly true with Java 9 Module as well. But it has its own characteristics. A Java 9 module contains:

Description of the module by openjdk:

A module is a named, self-describing collection of code and data. Its code is organized as a set of packages containing types, i.e., Java classes and interfaces; its data includes resources and other kinds of static information.

Name is very important characteristic of a module. The modular system identifies a module by name, so it must be unique. The best practice is to use the reverse domain naming scheme currently used for package names, like com.bytestree.examples .jpms.

The requires  clause is to define dependencies. It defines an external module on which current module is depends on. You need to have separate requires  entry for each dependent module in your module-info.java .

JDK 9 has java.base  module known as base module. This is an independent module which doesn’t require any other module. You don’t have to specify it using requires  clause in your module, it is available by default. It is similar to java.lang  package which we don’t have to import and still available for all classes.

The exports  clause is to define packages current module exports. Exported packages are open for other modules to use. You need to have separate exports  entry for each exported module in your module-info.java .

The exports .. to ..  clause is to export a package only to specific modules rather exporting it for everyone. This offers better security as you decide who should access exported package.

opens and opens to

In case you want to allow other modules to access classes in certain packages at runtime through reflection, opens  clause is useful. To allow only specific modules to access these packages, you should use opens to . Syntax is as follows:

You can also “open” entire module for reflection rather than a specific package.

Below is a diagram of a typical module which has two exported packages and two concealed packages. It also uses(requires) three modules from JDK: 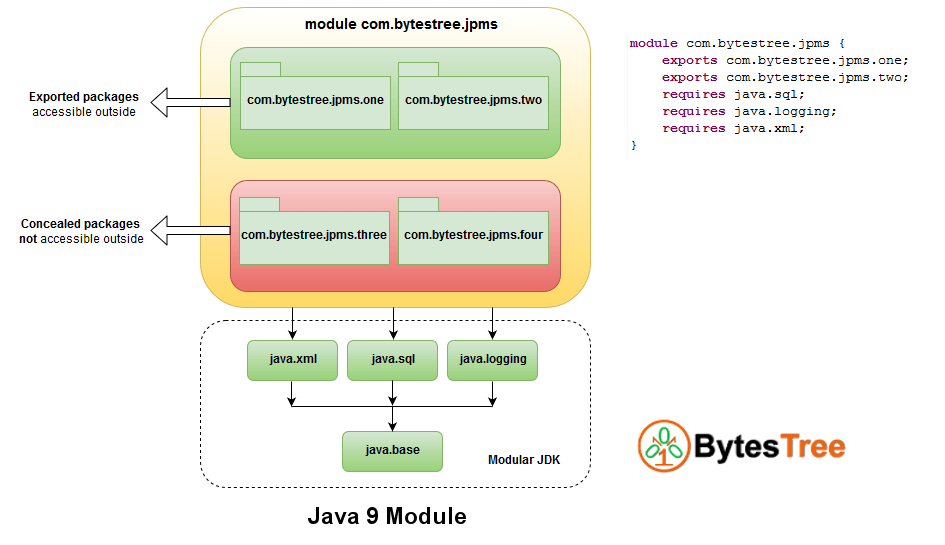 How to create and use modules

Enough about theory, now ready to get your hands dirty with code. Let’s create a simple calculator application using modules. We will be creating two modules here:

If you are more comfortable with IDE like Eclipse rather than the command line and simple text editor, then please refer below video on How to Create Java 9 Modules using Eclipse.

If you want to know the command line way of creating module, then continue here OR jump to Advantages of Modules

The folder and file structure for above modules is as follows:

Create Addition.java  in com.bytestree.maths  package. This class will perform the actual addition operation.

Create Main.java  in  com.bytestree.calculator  package. import Addition class and use it to add two parameters passed in command line.

Compile both modules and run the program. All compiled classes will go in module-demo/mods directory. Note the module-path argument while compiling com.bytestree.calculator module.

That’s it. We successfully created two modules in which one module uses a class from an exported package of another module.

Want to check the strong encapsulation in java 9? Try commenting “exports” from module-info.java  of  com.bytestree.maths  module and re-compile both modules.  You will get following error at compile time.

A thing to notice here is, Addition class is public, but we cannot use it unless we export the package in which it is present. Hence strong encapsulation really worked here 🙂

An Automatic Module is a module whose declaration is inferred by module system from a traditional jar that you have placed on module-path. You don’t have to make any changes in those third party jars, but you can still use them as modules. Name of these modules is derived from jar file name and it exports all the packages within it. So automatic modules do following things:

That’s all about modules for now. Hope this gives you required heads up to start building a modular application.

This site uses functional cookies and external scripts to improve your experience. Which cookies and scripts are used and how they impact your visit is specified on the left.

NOTE: These settings will only apply to the browser and device you are currently using.

These cookies are used to display ads that are relevant and engaging for the individual user and thereby more valuable for publishers and third party advertisers.