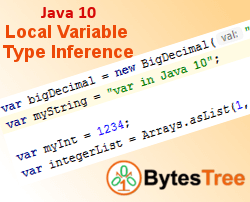 We all know that Java is very concern about type safety of variables and instances. The addition of generics in Java 5 strengthens the type safety in Java. But there are many other programming languages like C++, Go, Scala, Kotlin, etc, which infer the type of a variable by itself.

Now with the addition of JEP 286, we have Type Inference in java for local variable declarations with initializers. A thing to keep in mind that Java will still be strong statically typed language. The new feature just allows it to infer the type of local variables at compile time.

The main idea behind introducing this feature is to:

Note: The type inference feature is for local variables only. The compiler will not infer type for instance or class variables.

What is Type Inference?

Type Inference refers to an automatic detection of the data type of a variable/expression.

In Java when we declare any variable, we have to specify it’s data type in the declaration as well as initialization. For example:

In Java 10 using var we no longer need to specify the data type while declaring local variables if we initialize them at the same time. With that said, in Java 10 above code will change as follow:

In above code, except stringBuffer, every variable is valid and the compiler will infer it’s respective data type.  var stringBuffer; will not compile because we are not initializing it.

You must be wondering what the word var means in code given in the previous section? It sounds familiar if you already worked in javascript(though no relations with javascript here).

The identifier var is not a keyword; it is a reserved type name.

You can use var for following things:

You cannot use var for following things:

We can use Local Variable Type Inference for:

You already know about local variable declarations with initializers given in the previous section. Now check how to use Local Variable Type Inference in for  loop:

In above example, you also see how var is used for Collections.

In above code, due to the absence of left-hand side details, the compiler cannot infer the exact type of data in ArrayList, so it infers to supertype which is Object. Though you can use diamond operator here, it’s better to avoid it and specify the type on the right-hand side for better readability of code and correct inference like given below:

Use of var for the stream is perfectly valid.

Variables can have Anonymous class type.

Examples of Limitations of Type Inference

Without Initializer or initialize with null

You cannot instantiate multiple var variables at the same time as given  below:

There are no type details on the right-hand side, due to which you cannot use lambda expression initializer.

The correct way of initializing an array with var is:

var in the method signature

You cannot use var in the method signature, therefore you cannot use it as a return type or method parameter.

All code used to test Type Inference given above is available in GitHub.

Hope this article has given you details about what Local Variable Type Inference is and how to use it in your code. For any questions or suggestions, please leave a comment.

This site uses functional cookies and external scripts to improve your experience. Which cookies and scripts are used and how they impact your visit is specified on the left.

NOTE: These settings will only apply to the browser and device you are currently using.

These cookies are used to display ads that are relevant and engaging for the individual user and thereby more valuable for publishers and third party advertisers.